What Is A Fuel Regulator?

As the name suggests, it regulates fuel pressure. It won’t be acceptable to leave it like that because the fuel pressure regulator does much more than that. It regulates the amount of fuel sent to all injectors [for cars with direct fuel injection].

The amount of gas an engine needs depends on the driver’s command. For example, a car requires more fuel when traveling at 80-90 mph than 50 mph.

An engine runs with an air/fuel mixture ratio for proper ignition. The air/fuel has to be balanced. If the ratio is compromised, the engine will run lean or rich [too much air] or [too much fuel].

The fuel pressure regulators keep tabs on how much fuel there is and the pressure when delivering the gas to the injectors.

Now that you know what a fuel pressure regulator is, how does it work? 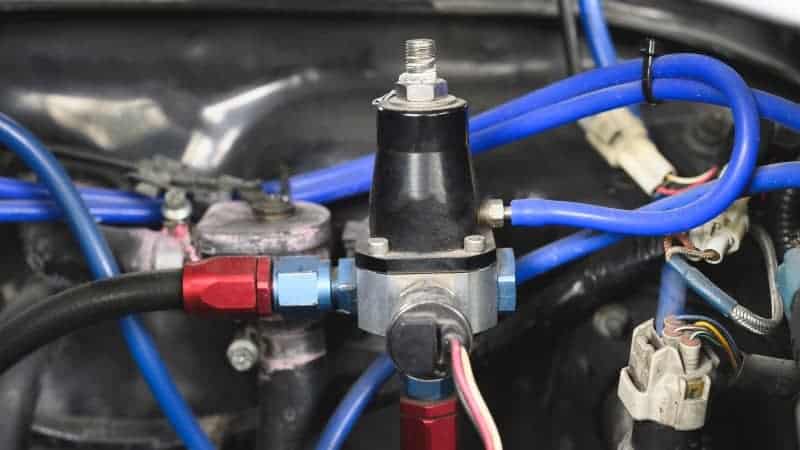 A misfiring engine can be mysterious and frustrating. The symptoms can vary depending on the vehicle that you drive and the specific source of the problem. It could be because of the ignition system, a problem with the manifold gasket, damages in the vacuum lines, and a bad fuel pressure regulator.

What Are The Symptoms Of A Bad Fuel Regulator?

Early signs of a failing fuel pressure regulator include engine misfires and poor acceleration and fuel mileage. The reason we batch them together is that each is caused by the same thing, the air/fuel mixture being off.

If your vehicle is displaying any of these symptoms, you may want to bring it in before any of the next ones show up.

Black Smoke Coming From The Exhaust

This symptom stems from the engine burning too much fuel (running rich). As the excess fuel burns off, it produces black smoke, which will exit out the tailpipe.

If your vehicle starts to look like the poster child for a “Stop Global Warming” campaign, there might be an issue with your fuel regulator. However, there’s no way to be sure of the exact cause unless you have it checked.

One indicator that the air/fuel mix inside the combustion chamber is off is if the spark plugs tips are covered in a black powder-like substance.

As you might have guessed, a bad fuel pressure regulator can often be the culprit. If you notice this symptom coinciding with a few of the others on your list, it might be time to have your fuel system inspected.

Gasoline In The Vacuum Hose

Be sure to watch for fuel dripping out of the tailpipe as well, which is another sign of a leaking fuel regulator.

If your engine is running rich, it may backfire while decelerating. Not only that, but you may also notice it hesitate before reducing speed, making it one of those issues that can become a safety hazard pretty quick.

The fuel regulator is not an expensive part to replace (more on that later), so why ignore it if it has an issue? Instead, if your car starts backfiring, get the fuel pressure regulator tested.

Here’s the most apparent symptom – an engine that won’t turn over. The fuel regulator is in charge of providing the right amount of fuel for any situation, including starting the engine in the first place. If there is not enough, it will not be able to fire up.

You may be able to get the engine started initially, but eventually, it will fail altogether. Many things can keep a car from starting, so be sure to look for other symptoms on this list to be sure.

The fuel pump makes noise, but it should never reach the point where it’s annoying. If yours has started making a “whirring” sound, it might be going out. However, the noise may also be caused by a faulty fuel pressure regulator.

The sound should be most noticeable when the engine is under stress, such as while accelerating, climbing a hill, or towing a trailer.

Fuel Drips Out Of The Tailpipe

Similar to having gasoline in the vacuum hose, if fuel drips out of your tailpipe, a bad fuel regulator may be the culprit. The fuel regular has several seals, which, when worn or damaged, can leak.

If a fuel leak is present, it means your engine won’t get enough, which will display as the engine having reduced performance.

How Much Does It Cost To Replace A Fuel Pressure Regulator?

Replacement is the appropriate course of action in most circumstances if your fuel pressure regulator is found to be defective. This might cost anywhere from $150 to more than $1000, depending on the make and model of your vehicle.

However, a fuel pressure regulator replacement costs on average $250.

This is a pittance compared to what may have been if this issue had been overlooked. Due to the above reasons, it is imperative that you keep a close look out for any of the following symptoms.

The problem has something to do with the excessive buildup of gasoline. Because there is more fuel than what the engine can handle, it can backfire. The continued combustion of the engine allows the car to continue running at the same speed. When you lift your foot off the pedal, it may take a while before you notice the car slow down.

This can have serious safety implications. If you’re driving at high speeds, there is a chance that you might figure in an accident. It will be quite difficult to adjust your speed when you need to decelerate. It is for this reason that one should never ignore this sign. Have a mechanic check your fuel system at once to institute the correct measures.

4. Fuel in the vacuum lines

A broken fuel pressure regulator can result in fuel in the vacuum lines.

The fuel pressure regulator is directly connected to the engine vacuum. Fuel leaked through this line will spread to the vacuum system and can eventually lead to other problems such as cracking or splitting of rubber vacuum hoses.

How do you test a fuel pressure regulator?

Step 1: Locate the Schrader valve on the fuel rail. You may have to consult your manual or conduct a quick online search to find yours.

Step 3: Find the manufacturer’s specifications for fuel pressure on your specific engine. This can be found in your car’s service manual.

Step 4: Start the car and let it idle. If the car does not start, have someone crank the engine for a few seconds. Then turn the engine off.

Suppose the pressure is lower than the recommended specifications while the car is running. In that case, you could have a leaking fuel injector, fuel pump malfunction, clogged fuel filter, or a bad fuel pressure regulator.

If the pressure drops as soon as the car is turned off, you could have a leaking injector, a leaking anti-drain valve in the fuel pump, or problems with the fuel pressure regulator.

Your fuel pressure regulator is likely bad if pressure is higher than specifications.

How To Replace A Bad Fuel Pressure Regulator

The FPR sensor is usually located in the fuel injector rail.

> Preliminary steps: ensure that the ignition switch is off and then disconnect the vehicle battery. Detaching the negative terminal is usually enough.

> Remove FPR screws: most fuel pressure regulators are attached to the fuel rail using screws, but depending on your vehicle other tools may be necessary. Carefully remove the regulator pushing it out ot the fuel rail. Be warned that many vehicles require removing the whole fuel rail in order to access the FPR screws. Don’t forget to replace the regulator o-ring if it not included with the new FPR.

> Install the new FPR sensor: retire the old FPR and then install the new one. Double check that you’re using the adequate part number.

> Clear DTC memory: using the OBD2 code reader clear the ECU memory to prevent any false code been stored. You will need entering in KOEO mode for doing so.

> Perform driving cycle: once you are done, drive the vehicle for more than 10 minutes. Try to accelerate as you would normally do.

How Do You Maintain A Fuel Pressure Regulator?

One of the best ways to ensure your fuel regulator lasts as long as possible is to replace your fuel filter every 2-years or 30,000 miles. Another way is to only fill up at Top-Tier gas stations, which hold a higher average quality of gas than others.

If you are looking for bad fuel pressure regulator symptoms, one thing that you have to watch out for would be the appearance of black smoke. To be specific, you will notice this coming out of the exhaust pipe. If there is a leaking or internal damage in the regulator, this causes the emission of black smoke in the tailpipe.

When the fuel pressure regulator is problematic, the engine can run rich. Aside from using more fuel to produce the power needed for the car to run, another effect is the production of black smoke. Normally, the smoke that is emitted in the tailpipe is gray or white. Otherwise, you have to check the fuel pressure regulator, although the problem could be with other components as well, such as bad carburetor setting, clogged air filter, and damaged injectors.

We are a participant in the Amazon Services LLC Associates Program, an affiliate advertising program designed to provide a means for us to earn fees by linking to Amazon.com and affiliated sites. Registration on or use of this site constitutes acceptance of our Terms of Service. © 2022 Recurrent. All rights reserved.