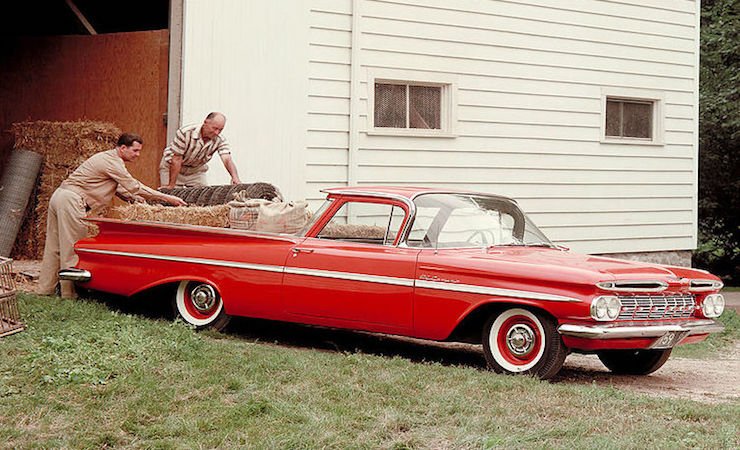 GM flirted with coupe-type trucks such as the Chevrolet Cameo Carrier and the GMC Suburban Carrier in 1955, but they went all-in with the El Camino for the 1959 model year. The El Camino was built on a modified Brookwood station wagon platform.

The first generation didn’t last long. It could have been the new flamboyant wings of full-sized Chevys or perhaps the Ranchero’s hefty stake in the market, but after just 2 years and 36,409 El Caminos produced, Chevy dropped the ax on the model.

It wasn’t until 1968, however, that the El Camino, featuring a total body makeover, and loaded with a more powerful SS engine, took its place in the iconic lineup of American muscle cars and remained there for the remainder of the 1960s and throughout the 1970s.

El Caminos, although relatively short-lived in Chevrolet production compared to other models, are practically ubiquitous in movies, television, and music, and remain a cult classic among car enthusiasts.

There is no stereotypical El Camino driver.

Consider the following, a President, a criminal, and a stuntman. No, it’s not the beginning of a bad joke, it’s just a short but recognizable lineup of famous, if not infamous, El Camino owners: Bill Clinton, David Koresh, and Evel Knieval, who hauled his twin Triumph motorcycles in the back of a white 1964 El Camino.

Often associated with the Billy Ray Cyrus mullet motto, “business in the front, party in the back,” it’s not surprising that El Caminos are a hit among country singers. Alan Jackson owned a 1971 SS-454 and Dwight Yoakam loving refers to his luxuriously enhanced 1978 model as his “trash truck.”

Legacy of the El Camino

It’s been more than a quarter century since the last El Camino rolled off the production line, and its story reads like a washed-up celebrity who was in the spotlight, then out of it, then got back in for a late-career surge before being cast to the side for newer, better models. But is there room for a comeback?

Chevrolet debuted an El Camino concept in 1995 based on the full-size Caprice station wagon, but production was cancelled thanks to the rise of the SUV. All we can do now is wait patiently for a possible future with an El Camino, and ponder the all-important question: Is it a car, or a truck? If you asked Chevy, they’d tell you it’s whatever you want it to be.