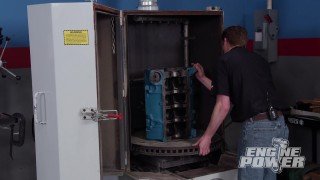 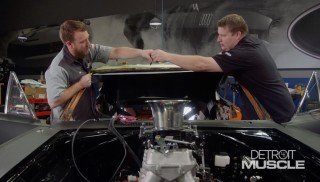 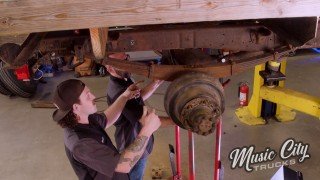 Though we’ve managed to locate the tractor, Big Red’s tandem trailers have never been found. We’re still not sure of their fate after an intense amount of searching—it’s entirely possible they’ve long since been destroyed. At the time of its sale, Lee Holman told the owner that “one went to the Bardahl race team…. [and] the second trailer… went to Bill Stroppe Racing in Long Beach, California.”

We know the first part of that story is true because there’s a single picture of this trailer in Bardahl’s livery, seen above. The second part of the story is less clear. Bill Stroppe was a legendary figure in American motorsports, known especially for his Baja 1000-crushing Ford Broncos. However, the Stroppe story has been mentioned by other sources without much evidence supporting it. The current owner is skeptical as well.

“Willie Thompson, a supercharger pioneer and employee for Bill Stroppe and later an employee for Holman and Moody in Charlotte, put me in touch with a gentleman who worked for Bill Stroppe. According to this gentleman, a trailer like that was never there.” he said. So its ultimate fate remains a mystery—so far.

The bogie connecting the two trailers, however, was included with the sale, and the owner still has it. If they do ever resurface, the trailers will be able to be reattached to the truck. But their return isn’t likely. Once they were separated from the famous truck, it would be hard to distinguish them from any other trailer. In the end, they’re just functional implements, and it’s likely they were worked until their useful service lives ended, and then scrapped or left to rot somewhere.

Today, the truck is still in near-perfect condition and sits in its custom-built garage, being visited occasionally by the owner and his family. The owner says that while it may be a little dusty, it hasn’t deteriorated at all during its time in storage. The phrase “ran when parked” would apply here—it will definitely still roll, and while booting up a decades-old turbine engine would be a delicate operation, the owner says the truck is in good enough shape to fire right back up with a little TLC. The last time it was driven was around the year 2000.

There’s one major thing still left to address, though: new pictures. While the owner has been gracious enough to speak with us and share a ton of information as well as the shots from the restoration we’ve published here, he’s so far declined to provide more current photos. Based on the response to our first story, Big Red is still an object of fascination for tens of thousands of people out there, even 60 years later. We know you want to see it as it stands today. We do, too.

That leaves the final question: Why is it so hidden away, and why has it been kept a secret all this time? It’s a question best answered by putting yourself in the owner’s shoes. As Lee Holman mentioned, the truck is immensely heavy and certainly limited in terms of the roads it can even travel on. It’s also powered by an ultra-rare, near unobtanium turbine engine that pretty much nobody knows anything about anymore. If there were an issue with this motor and the truck broke down while underway—or damaged itself attempting to start—what do you do exactly?

And if you don’t want to move the truck, coming forward with it means you’re essentially turning your home into a museum. Possessing a vehicle like this is a complicated responsibility if you also want to live a normal, private life. The owner doesn’t want people finding the truck, or the attention that would come with having such a famous artifact in his possession. However, despite this desire for anonymity and the numerous roadblocks related to showing Big Red to the world, he insists that the truck will not be in hiding forever.

“I was invited to the 30th anniversary celebration of the gas turbine in Dearborn [in 1983]. I talked to several people who had worked on the project and Big Red. Many of them thought the truck should be displayed in the Henry Ford Museum,” the owner told us.

“Who knows, maybe someday it will be. I have always thought Big Red was one of Ford’s greatest achievements.”

Know anything else about Big Red’s past, or tips on other long-lost concept cars? Contact the author directly: peter@thedrive.com